A computer needs the following information to function properly on a computer network:

There are two ways that a computer can obtain those details. Either automatically, or via manual configuration.

Usually when you receive your home router it is already pre-configured with a DHCP server to hand out configuration to your computers and other devices. The router is also prepared so that the addresses that the router hands out via DHCP is on the same IP network as the router’s LAN IP address. This is necessary for the clients to be able to use the router as their Default Gateway.

So when your router sees this DHCP request it will hand out an available IP address from its pool of free IP addresses, together with the other details that the computer needs. 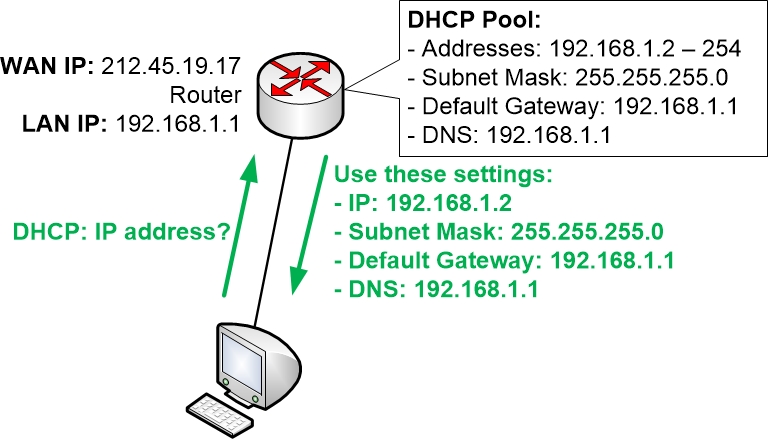 All clients on the LAN will receive the same Subnet Mask, Default Gateway and DNS Server settings from the DHCP server since those details are common to all clients.

Manual configuration of an IP address

Instead of letting the computer obtain its IP address from the router via DHCP you can choose to manually configure the IP settings on the computer. Normally this is avoided since it can cause a few different problems unless it is handled properly by the administrator, which is you.

When and why would you need to manually configure an IP address on a client?

If a computer obtains its IP address automatically via DHCP then it is not certain that the computer will obtain the same IP address each and every time you start the computer. The DHCP server remembers which computer that has gotten which IP address, but only for a certain amount of time. If a computer is powered off for too long (often a day or two, depending on how the router is configured) then the DHCP server will forget which IP address that it handed out to the computer. Also, if the router is powered off for any reason then it will typically forget about any DHCP leases it has previously handed out.

In some special cases, this could lead to problems. One such example is if you have had to make a Port Forward (a subject which is discussed in further details in other parts of this guide). Port forwards often point to an internal LAN IP address of a computer. As long as the computer keeps the same IP address the Port Forward will work. But if the computer changes IP addresses every so often, then after each IP address change the Port Forward must be updated in the router configuration.

When you configure an IP address manually on a computer you need to configure the same settings that a computer normally receives via DHCP:

If you choose to manually configure an IP address on a computer, then you also should make sure to exclude that IP address from the pool of DHCP addresses in your home router. Otherwise the router might hand out the same IP address to some other computer on the network. 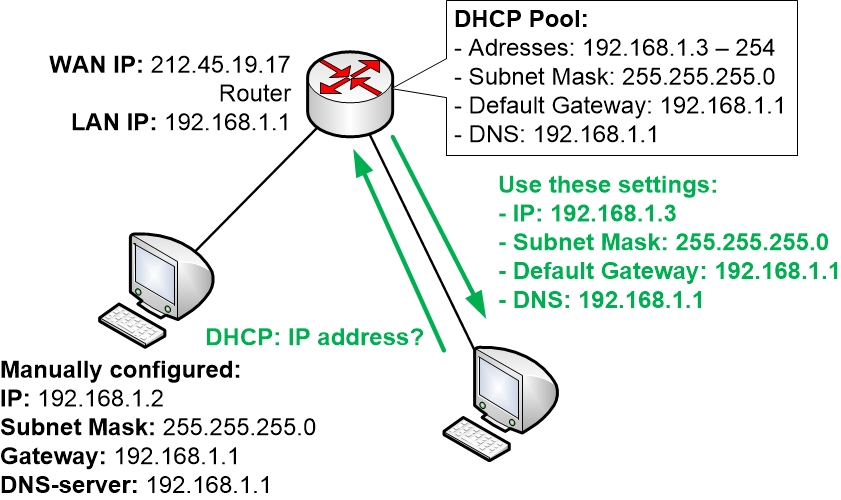 Using the street address analogy again, if two houses on the same street for some reason had the exact same house number, then the confusion would be great. Some packages and letters would end up at the correct house whereas others would end up at the wrong place. It would very much be hit and miss with a big random element to it.

The same thing would happen on a computer network where two devices were configured to use the exact same IP address. You then have an IP address conflict on the network, and the result is basically that communication stops working for the involved clients. Network communication simply does not work if only approximately half of the traffic ends up in at the correct place. 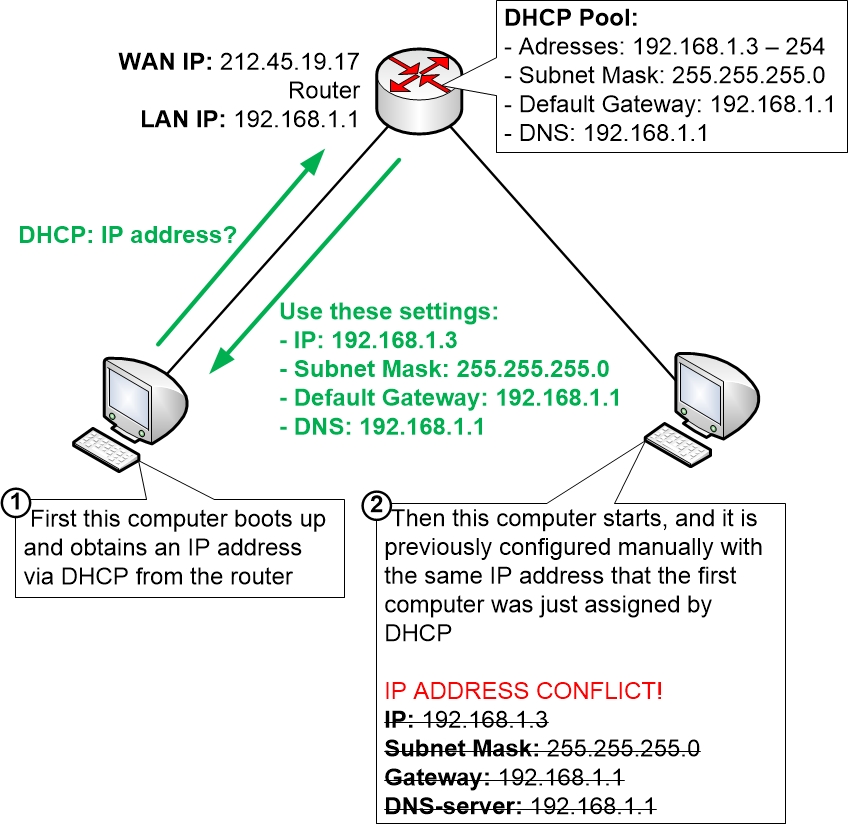