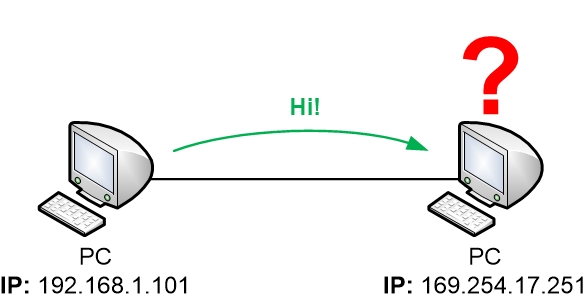 The pictures above will give you a few examples of what IP addresses look like. An IP address is divided into four parts, separated by dots. Each part of the IP address can have values between 0-255.

But how can you tell if two IP addresses belong to same IP network? Unfortunately, it isn’t as easy to tell IP networks apart from one another as it is with street addresses.

To really understand exactly how the Subnet Mask works you would have to study and learn about binary numbers and a few other more advanced topics. Luckily you don’t need any of that deeper understanding unless you work with IT or computer networks professionally.

In its simplest form, each part of the Subnet Mask is either the number 255 or the number 0 (zero).

Here are a few examples of IP addresses and Subnet Masks in combination:

Network Address, the name of the network

In the picture below, the first three parts of the IP address belongs to the IP network. This is determined by the Subnet Mask.

0 (Zero) is the lowest address that is available in the fourth part of the IP address. The computer thus belongs to the IP network 101.102.103.0

The fourth part (.5) of the IP address shows which host address that the computer is using on the IP network.

IP networks in your home network

As we mentioned earlier, each part of an IP address can have a value between 0-255. So the fourth part of the IP address permits for 256 different addresses (zero up to 255) that can be used for computers, IP phones, routers, laptops, printers and other devices. These type of devices are commonly referred to as hosts or clients. In a normal home network, those addresses are always more than enough to cover the devices that are connected to the network.

So in the end, there are 254 available addresses that can be used in a home network. Normally the home router will use one of those addresses, and the rest are available for your computers and other devices.

It is usually your home router that determines which IP addresses that the computers can use in your home network. The router hands out IP addresses, the Subnet Mask and other details to the clients. This will be discussed later on in the section about how addresses are assigned to devices.