UPnP stands for Universal Plug n Play. It is a standard for letting computers, routers and other devices that are connected to a network share information with each other about which services they are running and then automatically connect to those services when they need them. For example, a computer which has a bunch of movies or lots of music stored on itself can announce that to other devices on the network. If you then boot up your Smart TV which is connected to the same network you could then use your Smart TV to browse those movies, pick one and start playing it on the TV over the LAN network. 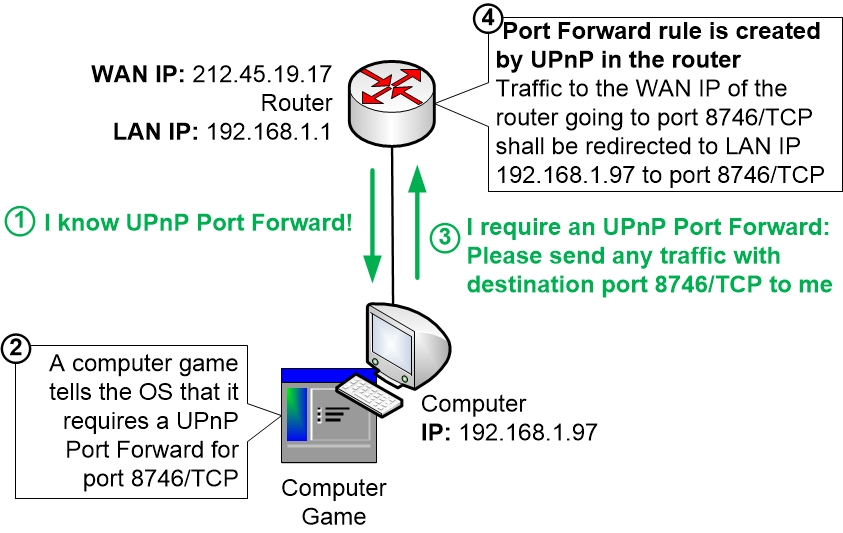 There are a number of prerequisites for UPnP Port Forwards to work at all:

Newer home routers often have UPnP Port Forward support, but most likely the functionality is disabled for security reasons. You might have to manually enable it in your router. The function is often called something like “UPnP Port Forwarding” or just “UPnP” but it is also possible that your router manufacturer has chosen to call it something completely different.

Modern operating systems have support for UPnP, but it is often disabled and must be enabled before it can be used. In Windows, the UPnP function is called Network Discovery.

Finally, not all programs have built-in support for UPnP Port Forwards. If the program does not have UPnP support then there is no fully automated way of making the port forwards work for that particular program. So the first thing you might want to check is whether or not the program has UPnP support.

Luckily most modern games have UPnP support, but you still have to google it to find out for sure if your particular game has UPnP support or not.