A switch is a network device with multiple interfaces or ports. The ports can connect computers and other devices, and any devices that are connected to the switch can communicate with each other. Switches aimed at the home network market segment often have 5-16 ports, but there are a lot of varieties available with different amounts of ports.

In fact, most people already have a switch at home, often without even knowing it. The LAN ports of your home router where you can connect your internal computers, printers etcetera are in fact built-in switch ports that act exactly like the ports in a standalone switch.

Whereas a hub just copies electrical signals between ports, a switch works intelligently with MAC addresses which have been mentioned previously to make sure that traffic that is sent between devices end up at the right place.

What a switch does is that it constantly monitors the traffic which is entering the switch from connected devices. It then learns about where the different MAC addresses of those devices are connected. It does this by looking at the traffic that arrives from computers to read the source MAC address of the traffic. 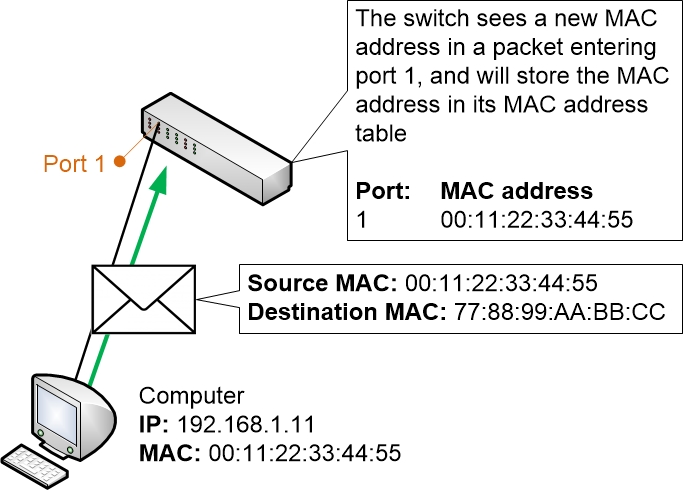 When the switch has seen at least one frame from each connected device it will know exactly which MAC addresses that are connected to what ports, and it will then also be able to forward traffic only to the correct destination ports.

If it can match the destination to a port in the table then it will forward the traffic only to that port. 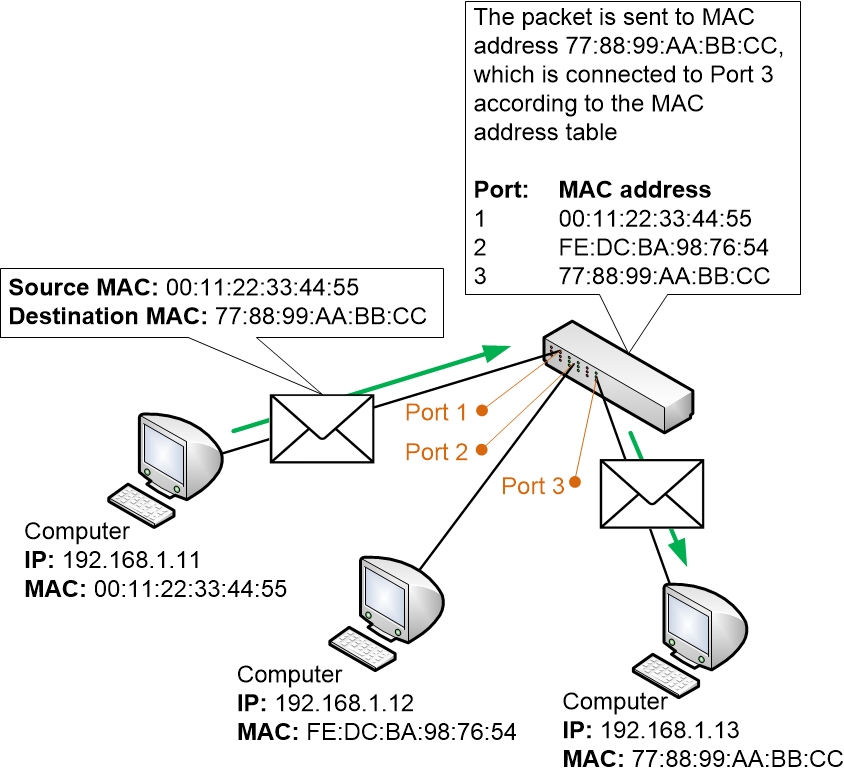 The most common exception is broadcast traffic. A broadcast is sent by computers when they want to send a message to all other devices on the same LAN. As mentioned earlier a computer could be looking for a DHCP server and uses a broadcast DHCP request to find out if there are any connected DHCP servers.

For broadcasts to work as intended the switch must handle broadcasts as a special case, and must send broadcasts to all other connected ports. It doesn’t act quite like a hub, however, because the hub is Half Duplex. The switch, which is Full Duplex, can still handle other traffic at the same time as it is sending a broadcast, so there is no need for all other computers to be silent while the broadcast is being sent. 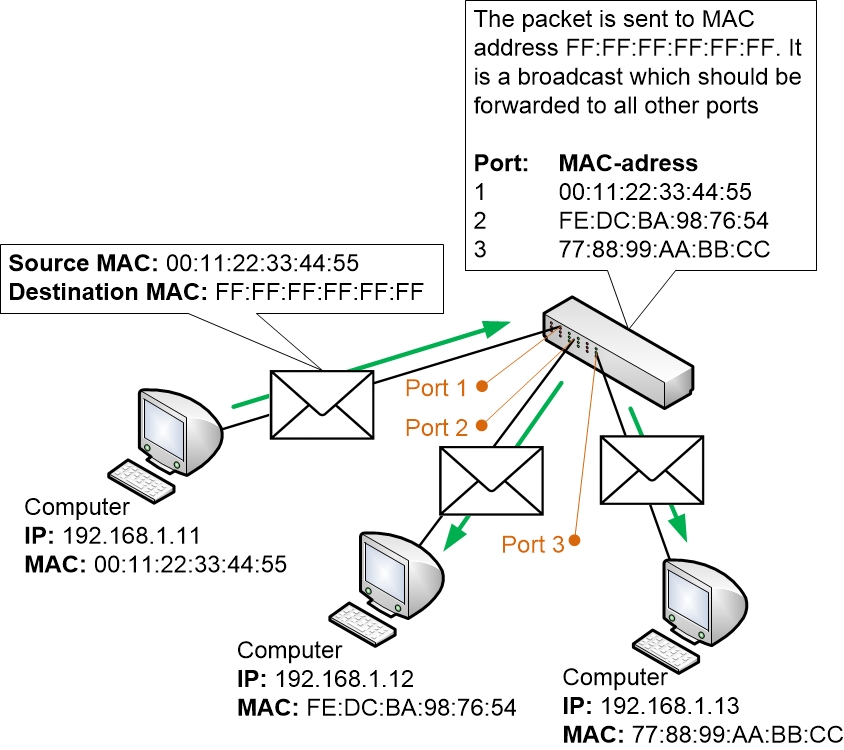 There is also another common scenario where switches send out traffic to all other ports, and that is when the switch simply does not yet know where the destination address is connected.

Let’s say a computer sends a message to another computer via a switch, but the switch hasn’t learned where the destination MAC address is located. This means that the switch cannot know where the second computer is connected. Then the switch simply treats the traffic as broadcast traffic and sends it out all other ports. 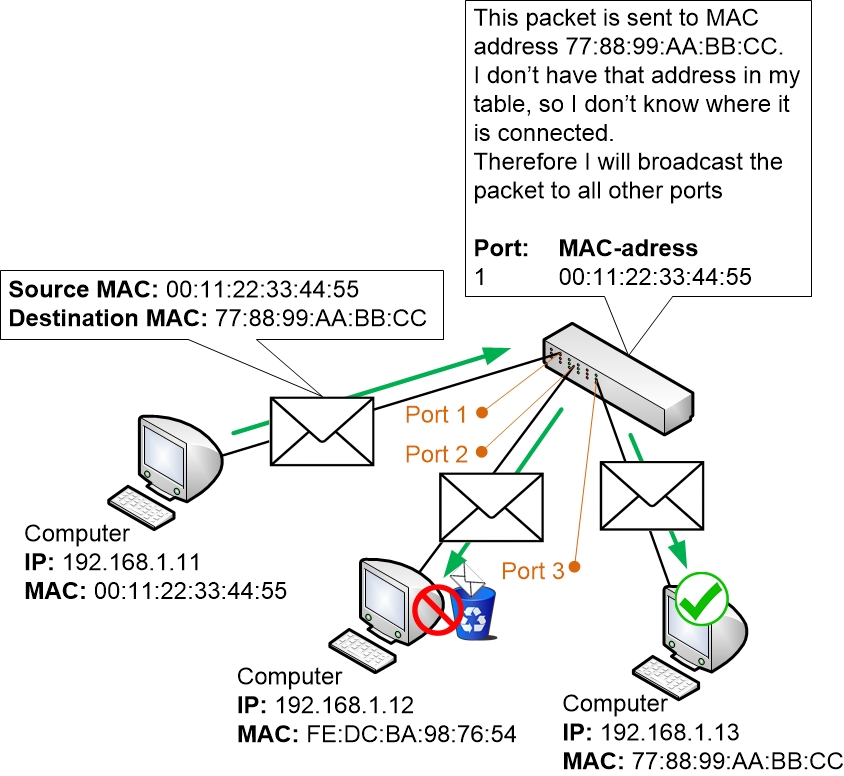 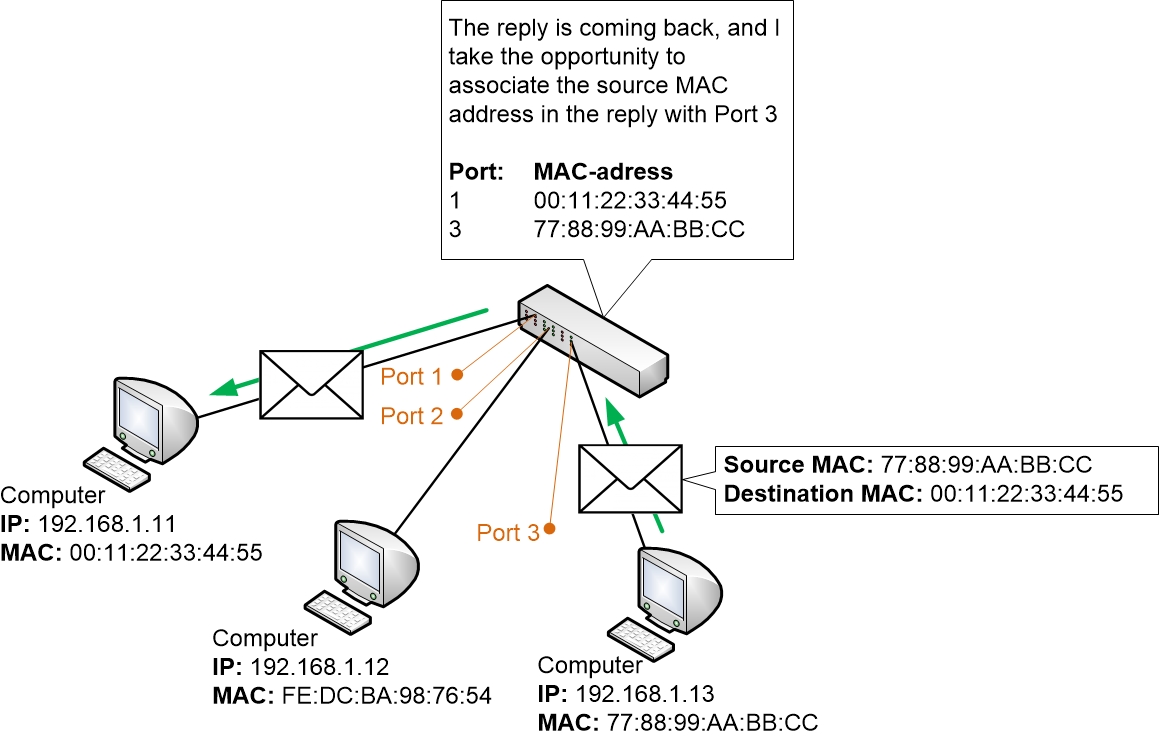