IP addresses are addresses that are assigned to computers and which can be compared to street addresses. If you want to send a letter to somebody then you would print down your message on a piece of paper. Then you would put the paper in an envelope, put the address of the receiver on the envelope and finally send it off. If a program on a computer wants to talk with a server, then the message is prepared by the program, and then the OS will put the message in a packet and send the packet to the IP address of the server.

But several people could share a single street address. Maybe a whole family lives in the same house. Often you don’t want to address the whole household with your letter but rather a single person living in that household. So a letter is normally also addressed to one specific person living at the address.

In a similar fashion, a single server can run multiple services or programs at the same time. For example, the server could run a Web Service, a DNS Service, an FTP Service and many other services. All of those services could be running simultaneously. And since they are running on a single server they also share the single IP address that the server is configured with.

So the server must have a way to know which service that each packet is meant for so that it can look at incoming data traffic and hand over the traffic to the correct service.

The solution that is used in network communication is something called Ports. These ports are used to give addresses to different services.

A computer can manage just fine with a single IP address, but it can listen on many ports simultaneously. Each program that wants to be able to receive network connections and data packets will require its own unique port.

The programs and services that you start on a computer will tell the OS (Windows, Mac OS X etc) which ports that the service would like to listen to. The OS will then start listening for traffic to that port, and if any such traffic arrives at the computer then the OS will forward that traffic to the correct program. 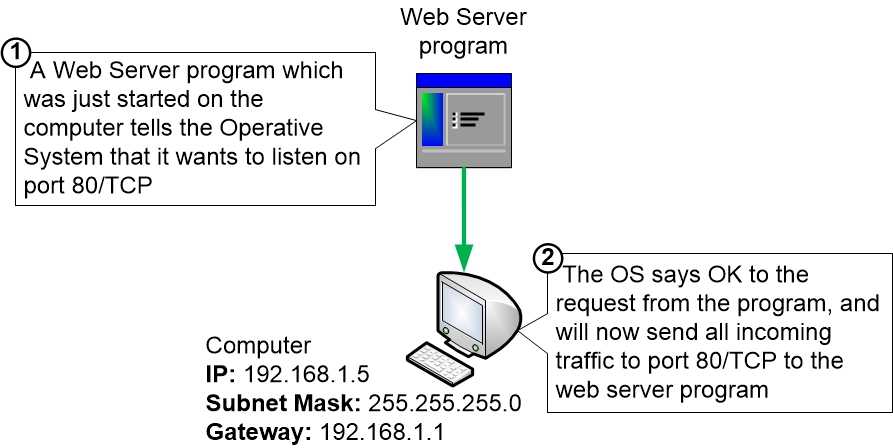 There are Internet standards that determine which ports that common programs and services should use. This makes it a bit easier to know which ports that different services are probably using. A web server for example almost always listens for traffic on port 80, and a secure Web Server listens on port 443.

Here is a table showing a few examples of Ports that some common programs can listen to:

The table above also displays two different so-called Protocols that different services use, TCP and UDP. Those protocols will be discussed in the next section.